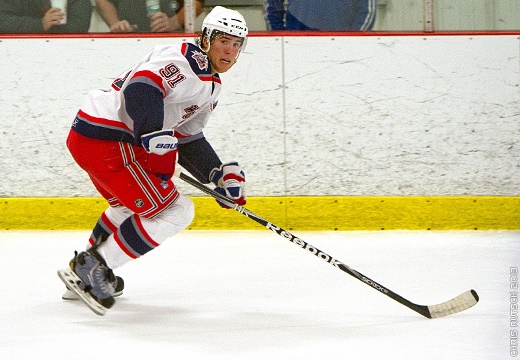 Dupont, a 6-2, 210-pound seventh-year pro, is entering his second tour of duty with the Wolf Pack, having skated in a total of 297 games, fourth-most in franchise history, with the Wolf Pack/Connecticut Whale from 2007-08 through 2010-11. Dupont registered 58 goals and 90 assists for 148 points during those four seasons, to go along with 389 penalty minutes.

Dupont, 26, played last year in Italy for Italian Cup champion Valpellice, scoring 16 goals and adding 24 assists for 40 points, while serving 60 minutes in penalties, in 37 regular-season games. In the postseason, the Russell, Manitoba native led the Valpellice team, and finished third in the league, in assists and finished third on the club in points, with 3-14-17 in 16 games. Dupont suited up for one NHL game during his time in the Ranger organization, and in 338 career AHL games with the Wolf Pack/Whale and Milwaukee Admirals, he has totaled 65 goals and 97 assists for 162 points, along with 420 PIM. He was originally a third-round (66th overall) draft pick by the Rangers in 2005, from the Calgary Hitmen of the Western Hockey League.

O’Donnell is a 6-1, 192-pound rookie from St. Mary’s University, of Atlantic University Sport, in his hometown of Halifax, Nova Scotia. In 28 games with the Huskies in 2012-13, the 25-year-old O’Donnell netted 14 goals, second-most on the team, and added 12 assists for 26 points, which placed him fourth among St. Mary’s skaters. Following the conclusion of his university season, O’Donnell joined the ECHL’s Florida Everblades, for whom he played five regular-season games, contributing one goal and three assists for four points. In 12 playoff games for the Everblades, O’Donnell posted two assists and 17 PIM.

The Wolf Pack opens its 2013-14 regular season this Saturday, October 5 at the XL Center against the Norfolk Admirals. Faceoff for that game is 7:00, and the full 2013-14 Wolf Pack regular season schedule can be viewed at www.hartfordwolfpack.com.