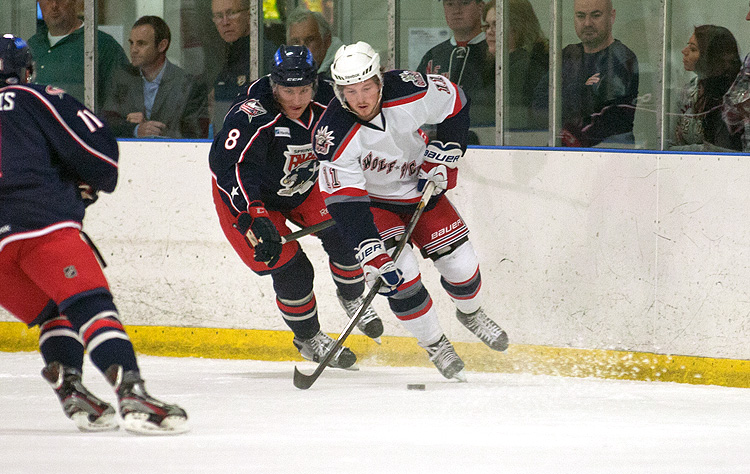 Sean Collins’ goal with 4:17 remaining in the third period gave the Springfield Falcons a 4-3 win over the Wolf Pack Sunday at the International Skating Center of Connecticut in Simsbury, in the Wolf Pack’s preseason finale.

The Falcons enjoyed an 11-3 shots advantage in the first period, but it was the Wolf Pack who scored first, cashing in on the game’s first power play at 13:19.

With Lukas Sedlak in the penalty box for slashing, Hughes, a rookie defenseman, took a pass from in deep from Dupont and slid a quick shot along the ice past Falcon starting goaltender Linus Lundin.

Springfield then replied on its first man-advantage at 16:06, after Aaron Johnson took a holding minor at 14:39.

It was Aleardi tying the score for Springfield, burying the puck behind Wolf Pack starter Cam Talbot from the left side of the slot, after a pinpoint pass from the right point by Patrick McNeill.

Aleardi found the net again at 9:38 of the second period, on a breakaway. As a four-on-four situation was expiring, Austin Madaisky fed a pass to Aleardi, who was coming off of the bench on a line change, and Aleardi was able to snap a shot into the top corner on Talbot’s glove side.

Both teams changed goaltenders at that point, with Jason Missiaen replacing Talbot (two goals-against on 20 shots) and Mike Clemente going in for Lundin (one goal-against on six shots).

Hansen gave Springfield a 3-1 advantage with a 4 on 4 goal at 15:24, Hansen’s third in the two games between the Wolf Pack and Falcons. Trent Vogelhuber passed the puck from along the goal line on the right wing side to Hansen in the slot, and Hansen fired it past Missiaen’s catching glove.

The Wolf Pack got that one back on power play at 18:03, with Klassen scoring from the left point. Klassen, who scored only one goal in 75 games with the Whale last season, took a full windup and pounded a slap shot into the top shelf behind Clemente.

Hartford still trailed 3-2 going into the third period, but would draw even on a power play at 9:52. Micheal Haley fed Kristo in the right-wing circle, and Kristo beat Clemente with a snap shot.

The winning goal came at 15:43, when Vogelhuber found Collins all alone in front of Missiaen. Collins failed on his first attempt, but got the puck past Missiaen on second effort.

The Wolf Pack finished the preseason with a 1-2-0-1 record, and the team opens its 2013-14 regular season this Saturday, October 5 at the XL Center against the Norfolk Admirals. Faceoff for that game is 7:00, and the full 2013-14 Wolf Pack regular season schedule can be viewed at www.hartfordwolfpack.com.