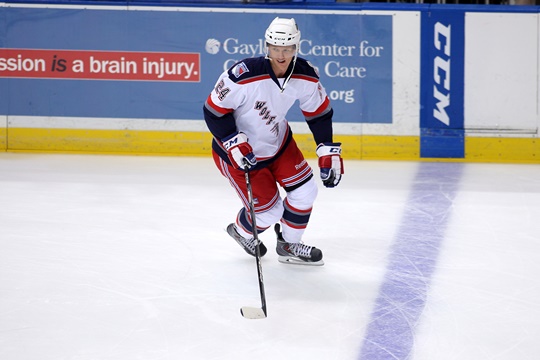 Nash, a fourth-year pro out of Cornell University who was signed to an AHL contract by the Wolf Pack July 25, had yet to play a game since being loaned to the Road Warriors by the Pack on Monday.  Prior to his assignment to the ECHL, Nash had played in one game with Hartford, in which he was Even with two penalty minutes.

Klassen, who saw 114 games of action with the Connecticut Whale over the last three seasons, has skated in two ECHL games this year with Greenville, after signing an ECHL contract with the Road Warriors October 11.  The fourth-year pro was +1 with three shots on goal in those two contests, after logging 75 games in a Whale uniform last season.  Klassen, a 6-2, 199-pound native of Watrous, Saskatchewan, had one goal and seven assists for eight points in 2012-13, along with 43 penalty minutes and a +7, which ranked as third-best among Whale defensemen.

The 24-year-old Klassen has registered one goal and eight assists for nine points, along with 65 PIM, in his 114 career AHL outings with the Whale, and in 91 career ECHL games with Greenville he has four goals and 19 assists for 23 points, with 106 PIM.  Klassen was originally signed as a free agent by the parent New York Rangers July 27, 2009, out of Saskatoon of the Western Hockey League.

The Wolf Pack’s next game is tomorrow night, Friday, October 25, a road outing at Albany.  Faceoff is 7:00 PM, and all the action can be heard live on Fox Sports Radio 1410, and on-line at www.foxsportsradio1410.com and iHeartRadio.  Video streaming is available at www.ahllive.com.

The next Wolf Pack home game is Wednesday, October 30 at the XL Center, with the Bridgeport Sound Tigers coming to town.  Faceoff is 7:00 PM, and that is another Wolf Pack “Winning Wednesday”.  At all Wednesday night home games this year, if the Wolf Pack win, each fan receives a free ticket to the Pack’s next home game.  Some restrictions apply, and full details are available on the Wolf Pack’s official website, www.hartfordwolfpack.com.