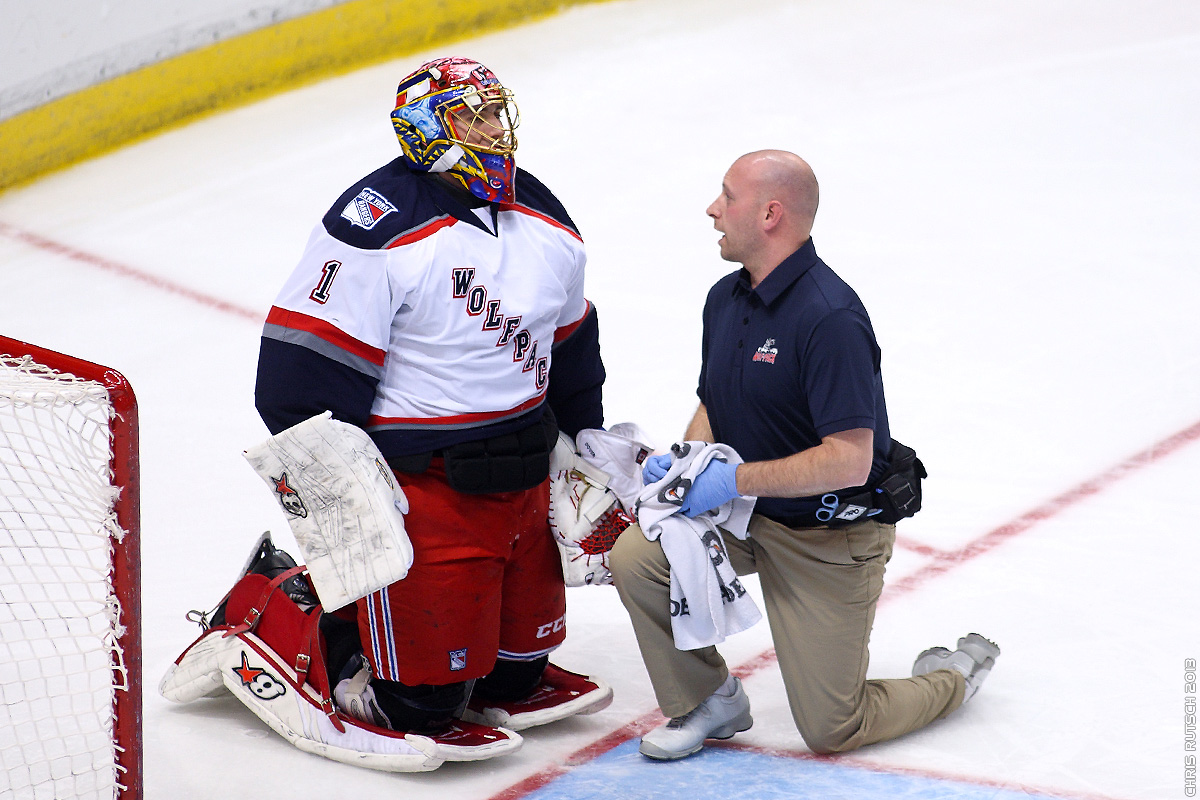 Longevity and continuity are not often hallmarks of pro hockey in general, and the minor pro level in particular.

The Wolf Pack, however, have largely been an exception to that truism, with General Manager Jim Schoenfeld in his 11th season with the team, Ken Gernander in his seventh year as head coach, and Assistant Coach Pat Boller in year number seven in that role.

The stability also extends to the training room, with Athletic Trainer Damien Hess having celebrated his 1000th game in pro hockey this past Wednesday, when the Wolf Pack defeated the Worcester Sharks 2-1 in Worcester.

Hess, who is in his tenth season on the Wolf Pack staff, came to the Pack in 2004, after three years with the Atlantic City Boardwalk Bullies of the ECHL.  In a conversation Friday in St. John’s, Newfoundland, where the Wolf Pack are on their last road trip of the regular season, Hess chuckled when asked if it seemed like he had been at his job long enough to have chalked up a thousand games.

“Some nights, it really doesn’t,” he said.  “I was thinking about it the other day, I can remember the first game, which happened to be a win, 13 years ago in Atlantic City.

“This is my tenth year here with the organization, they’ve treated me very well and I’m very happy here, and I love being here.”

In terms of what it takes to achieve the type of longevity that Hess has enjoyed with the Wolf Pack organization, he identified maintaining a positive outlook as a major key.

“I really think it comes down to just your approach to the job and your approach with the players, and your willingness to just enjoy every aspect of it,” Hess said.  “I’ve seen guys who just get frustrated with the job, and it leads to them getting out of hockey.  I love what I do, I love coming to the rink every day, I love being around the guys, and I wouldn’t trade it for anything else right now.”

Another big positive for Hess has been the way in which the parent New York Rangers run the operation in Hartford, making sure that things get done in an NHL-type fashion, on a number of levels.

“They let me do my job,” was what Hess boiled it down to.  “They give me a little freedom to make the decisions and do the job the way it should be done, but they also take care of the players correctly, and from my perspective, they allow me to do what I need to do to get what the players need, in order to take care of them as well.”

That job of taking care of the players has been made easier by the presence of Mark Cesari, who is the Wolf Pack’s strength and conditioning coach, but also has an athletic training background.

“Mark’s been a huge addition for our staff over the past three years,” Hess said.  “He and I are on the same page every day when it comes to what we do with guys, both from a treatment and rehab perspective.  So it’s very helpful for me, once I have finished my work with a guy, to send him to Mark and know that they’re getting good quality work with him as well.”

Burgeoning technology makes the medical and rehab fields an ever-changing landscape, but according to Hess, the biggest difference in his job now, compared to when he started at the pro level, has nothing directly to do with his hands-on work with athletes.

“The biggest change that I’ve noticed in my tenure is really just from the record-keeping aspect of it,” the York, Pennsylvania native said.  “Back when I started everything was mostly done by hand, and you had to have good files, but now with electronic medical records being the way they are, and needing to be done the way they’re done, that’s probably the biggest change, I find.”

Counting the two games up in St. John’s, the Wolf Pack have only four more games on their regular-season schedule, so the long grind of the AHL season is nearing its end.  Hess sees first-hand the toll that the battle takes on the players, but what of the off-ice staff?  Do Hess, Cesari and equipment mavens Russ Holdredge and Craig Lewis find themselves getting worn down by 70-plus games of helping the players keep themselves ready?

“A little tired,” Hess responded, “we get a little tired as the year winds down, but at the same time, the job is really no different now than it was in September or October when we first started.  You have to really learn to manage your time, and manage yourself, and be able to handle those stresses as they come.”

One of those stresses, for Hess, has been several long-term injury situations that have cropped up this season.  The most prominent of those are the concussion that has felled forward Michael Kantor, and sports hernia surgeries undergone by forward Micheal Haley and blueliner Stu Bickel.

“It’s been a bit of a struggle this year with some of those injuries that we’ve had,” Hess admitted.  “Unfortunately with the concussion that Michael Kantor suffered, it’s a pretty significant one, he’s been out since January.  We’re optimistic that he’ll be fine, but that’s been a long process, and this is the first time we’ve really ever had two guys in the same season with the sports hernia surgery.  So we’ve had a lot of different struggles this year, and it’s funny, I’ve seen it go through phases like that.  My first few years here we had a bunch of guys with shoulder injuries, and then we went through a phase with a bunch of knee injuries.  I think it’s just unfortunate luck, but that’s just the way it is this year.”

And when you have been around an AHL bench and training room as long as Hess has, you see many different phases come and go.  Hess doesn’t spend a lot of time sitting around and thinking about the thousand-game number, but it is a point of some pride for the veteran medical man.

“I think it’s a pretty big milestone,” he said.  “When you think about it, in order to get a thousand games, you’re looking at at least 13 years, regardless of what level you’re working at, and that’s a long time, especially for me, for ten of those years being in one place.  So I look at it as a pretty big milestone, but I’m also looking forward hopefully to another thousand or more.”