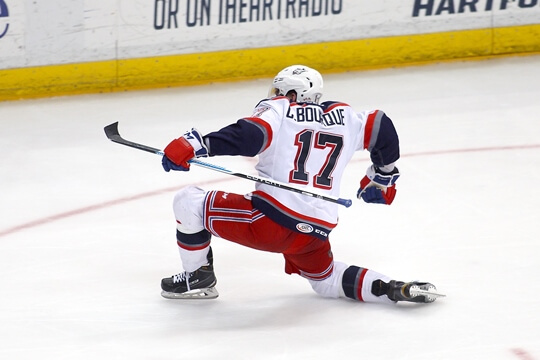 The Wolf Pack scored five third-period goals, three of them on power plays, Friday night at the XL Center, to come from behind and defeat the Syracuse Crunch, 6-4.

Marek Hrivik scored twice, including the game-winner, in the third-period burst, and Justin Vaive, Chris Bourque and Chris Mueller also scored in the third.  Ryan Haggerty also had a goal and an assist in the game for Hartford, and Mackenzie Skapski made 33 saves.

Ryan Martindale had two goals for Syracuse, and Yanni Gourde had a goal and an assist.

The win improved the Wolf Pack’s record to 37-23-5-4 for 83 points, and lifted them to within six points of the first-place Crunch in the Northeast Division.

“It was a character win for us,” said Wolf Pack coach Ken Gernander following the contest. “Everybody collectively realized how important these points are, and we felt it was within us to get them. We really stuck with it.”

Leading scorer Chris Bourque echoed his coach’s sentiment, saying, “We really enjoy playing with each other.  It feels like something special in that locker room. It’s really coming together right now, and if we keep playing like this we’ll be a hard team to beat.”

Syracuse opened the scoring, as the Wolf Pack’s Chad Nehring lost control of the puck behind the Hartford net. Joel Vermin of Syracuse was there to collect the loose change and took the puck around the net and stuffed it past Skapski’s left pad. It appeared as if he was looking to play it back up to the point but instead quickly turned and snuck it inside Skapski’s pad. The goal was unassisted, coming with 6:56 elapsed in the first period. It was Vermin’s 11th tally of the season.

Syracuse added to their advantage just 51 seconds later. Gourde took a pass from Joey Mormina as Syracuse was entering the Hartford zone, and struck a hard slapshot that beat Skapski glove side high from the top of the left circle. The time of the goal was 7:47, assisted by Mormina and J.P. Cote. Gourde brought his total up to 27 goals on the year with the tally.

Hartford had several close calls in the first period, including a goal post hit by Joey Crabb and numerous chances on their two power play opportunities. Yet it took them until the 6:50 mark of the second period to finally get on the board. A Syracuse defenseman coughed up the puck after whiffing on a shot from the point, and Haggerty jumped on it. Haggerty carried through center ice into the attacking zone and, on a 2-on-1, used Hrivik as a decoy and buried a wrist shot from the right circle. The goal was unassisted, and Haggerty brought his total up to 14 on the season.

Syracuse responded with just over a minute remaining in the second period. Martindale let fly a wrist shot from the high slot that clipped Danny Kristo on its way to the net. The redirect off of Kristo’s body was enough to throw off Skapski and the puck found the back of the net. That goal came at 18:47, and receiving credit for the assists were Jonathan Marchessault and Jared Nightingale.

The third period was a wild ride, starting with the Wolf Pack pulling within one with 16:05 remaining on the clock. Haggerty let go a wrist shot from the right circle that bounced off the pad of Crunch starting goaltender Kristers Gudlevskis. Waiting in the crease was Hrivik, who took a stick to the face as he put in the rebound for his tenth goal of the year. Hrivik was slow to get up, but shook it off and was back on the ice soon thereafter.

Syracuse was quick to answer. With the Wolf Pack on a power play, Martindale again struck with 4:14 elapsed in the third period.

Hartford was not giving up, though. On a later power play, Mat Bodie took a slap shot from the left point which Justin Vaive was able to tip past Gudlevskis. The goal came with exactly twelve minutes remaining in the period, accompanied by a huge fist pump from Vaive. It was his 13th of the season, with Bodie and Oscar Lindberg tallying assists. That was a shot of energy for the Wolf Pack offense that was desperately needed.

“Bodie is so savvy, he’s got his head up,” said Gernander. “He finds lanes through, and a lot of times he doesn’t take the slap shot or the big wind up. It’s pretty subtle.”

“Can’t say enough about Vaive in front of the net there,” added Chris Bourque. “He’s such a big body and gets a stick on every puck that he needs to. But he lets the ones pass that he thinks are going on (net), and that’s such a good trait to have because some guys just try to tip everything.”

Two minutes later the Pack built on their momentum and pulled even with the visitors. Crabb threaded a saucer pass from deep inside his own zone between two Syracuse defenders at the blue line. On the receiving end was Chris Bourque, who was already streaking across mid-ice and caught the puck as he flew into the Syracuse zone.

“Joey saw it right away,” said Gernander of Crabb’s gorgeous pass. “Showed some patience and poise to get himself in a better position to make that pass, a nice saucer pass.”

Bourque had enough daylight to pull any number of fancy moves he wanted, but instead elected to take a hard wrist shot that beat Gudlevskis on the glove side. It was his 27th goal of the season, with Crabb receiving credit for the solo assist.

As the game ticked down to the final minutes, Syracuse replaced an apparently-injured Gudlevskis with backup Allen York, and York was greeted by a Wolf Pack goal almost immediately. Hartford was the beneficiary of a great bounce when Tommy Hughes let fly a shot from the right point that was well wide of the net by about five feet. Fortunately for the Wolf Pack, Hrivik was in the area and the puck bounced off his skate, fooling York and giving the Wolf Pack the first lead of the game. The play was set up by a savvy Ryan Bourque who kept the puck from trickling out of the offensive zone.

That gave the Wolf Pack a 5-4 lead, and the home squad took advantage of a holding penalty to Mormina with 2:01 left, getting an empty-net goal from Chris Mueller on the power play at 19:32.

The Wolf Pack are right back at the XL Center Saturday night, hosting the AHL-leading Manchester Monarchs in a 7:00 game.

Tickets for all remaining 2014-15 Wolf Pack home games are now on sale at the Agera Energy Ticket Office at the XL Center, on-line at www.hartfordwolfpack.com and by phone at (877) 522-8499.  Wolf Pack tickets start as low as $12 for youth 12 years old or younger.