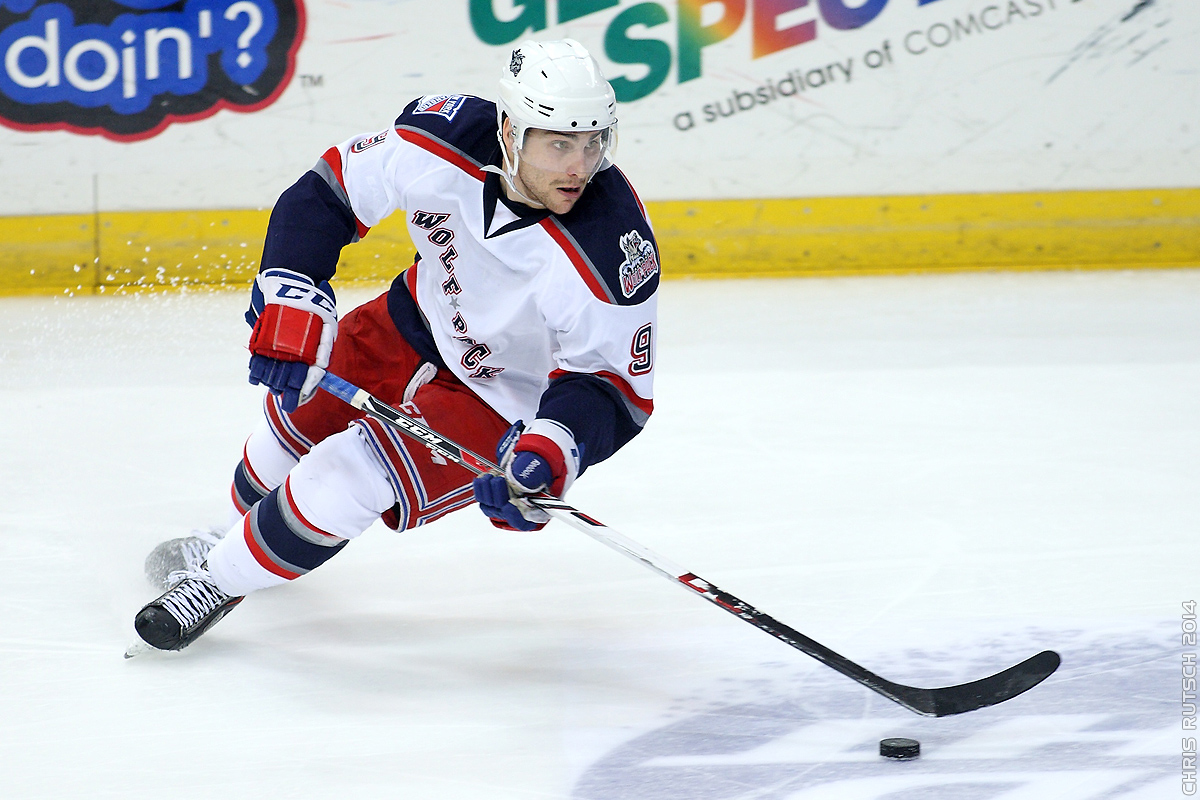 Bourque Brothers Relish the Chance to be Teammates

With Ryan Bourque, a three-year Wolf Pack mainstay, being five years younger than his brother Chris, a veteran of nine seasons of pro hockey, the opportunities for the two siblings ever to play together have been limited.

“Just in summer leagues,” Ryan said recently about his and Chris’ experience wearing the same jersey.  “Me and Chris played together with a bunch of our buddies, and actually the old man (Ryan and Chris’ father, Hall of Fame defenseman Ray Bourque) was on our team too, but he’s had to limit his playing the past few years.”

With Chris signing a free-agent contract with the New York Rangers July 2, though, there is every chance that the two Bourques will spend this year on the same team, either in the NHL with the Rangers or in the AHL as members of the Wolf Pack.

That possibility has both of the brothers extremely pumped up.

“It’s real exciting, obviously,” Ryan said last week, after a Ranger training camp practice.  “Growing up, as kids, just battling in the back yards and being able to become really close friends over the years, we always talked about how it would be pretty cool to be able to play with each other in the future, if we ever had an opportunity.  Just the opportunity to suit up, whether it’s in Hartford or in New York, with your big brother is a pretty cool experience, so I’m looking forward to it.”

Chris added, “It’s definitely an exciting opportunity for both of us.  It’s something that we’ve never had an opportunity to do, and you don’t know if a chance like this is going to come.  So when they (the Rangers) offered me a contract, it was a no-brainer to sign with them.  I think we’re both very excited, and we’ll enjoy it as long as it lasts.  Hopefully it’s in New York, but if it’s in Hartford, then that’s great too.  It’s something that doesn’t come along too often, where brothers get to play in the same organization, so we’re going to cherish every moment that we get, and it’s just hopefully going to be a real exciting year.

For Chris Bourque, who won three Calder Cups during his six seasons with the Hershey Bears, and an AHL scoring title in 2011-12, the chance to play with Ryan was a big factor in his signing with the Ranger organization, but it was not the only attraction.

“It’s such a historic franchise,” the 28-year-old Boston native said.  “I was always a Boston Bruins fan growing up, but the Rangers were right up there.  And to get a chance to put this jersey on is an opportunity that I couldn’t pass up, and having my brother in the organization is just that added extra motivation to sign here.  We’ll go to (training) camp here, see how it goes, and then I think we’re both really looking forward to the season.”

The 2014-15 campaign marks a return to North America for Chris, who spent last season overseas.  He started 2013-14 in Russia’s KHL with Ak-Bars Kazan, and then moved on to Biel of the Swiss A League in late November.  For Bourque and his wife Kim, who have a young son, Kingston, the European sojourn was a mixed bag of enjoyment and challenges.

“It was all right, it was long,” he said of his year abroad.  “Bringing your family over there when you’ve got a small child, it’s always a little bit questionable, but overall it was a good experience.  It’s always good traveling the world and seeing different places and different cultures.  I really enjoyed my time in Switzerland last year.  It’s a beautiful country and a good hockey league.  I’ll just try and take the positives out of last year and move forward.”

There were definitely plenty of positives for the younger Bourque brother last season, and Chris, keeping track of it from the other side of the pond, was extremely excited to see the progress that Ryan was making with the Wolf Pack.

“I would always check the stat sheet after he played,” Chris said.  “He picked up 20 goals and had a decent amount of assists.  And I think everyone sees the effort’s always there with him, so the confidence that he can score at that level (the AHL), hopefully that gives him the confidence to come up here (the NHL) and show them that he is a good offensive player, because he really is.  I knew that all along, it’s just that sometimes you’ve got to be given the right opportunity to put up those numbers.  He had a heck of a year last year, and hopefully he can build off that.”

Ryan, who had scored six and eight goals, respectively, in his first two pro seasons, broke out for 21 in 2013-14, second only to Danny Kristo’s 25 among Wolf Pack skaters.  He also added 16 assists for 37 points, more than double his previous pro high of 15.  His heart and tenacity had always stood out since his arrival in Hartford, but his numbers last year made a clear statement that he can much more than just an “energy guy”.

“The second half of the season, I think it was a breakthrough,” Ryan said of last season.  “I just got an opportunity, and I definitely made the most of it.  I think it was the first time in my three seasons that I really jumped on an opportunity and really showed the things that I could do in an offensive way.  I don’t think the effort or the energy or anything like that’s ever going to change, but there’s another side of my game that I was yet to show in this organization.  I was just really grateful for the opportunity, and was able to capitalize on it, and I think just to keep growing on that would be a really big step for me, and that’s what I plan on doing.”

Also significant on Ryan’s stat line for the 2013-14 Wolf Pack was the fact that he had the top plus/minus figure on the club, with a +16, and that his power-play goal total of seven was tied for best on the team.  Clearly, his two-way game was becoming a strong calling card.

“I’ve always kind of prided myself on being able to play on both sides of the puck growing up,” Ryan said, “and I think the more versatile you can be as a player, and the more coachable that you can be, those are two aspects that really stand out and give you an aspect you can use in any situation.”

Ranger training camp brought the brothers Bourque to the MSG Training Center, the Rangers’ practice facility in Tarrytown, NY, and Ryan Bourque must have felt like he never left.

Ryan was a “Black Ace” this past spring for the parent club, part of the taxi squad that stayed in practice shape at the Training Center for the entire Ranger playoff run.  That was a nearly two-month engagement, as the big club went all the way to the Stanley Cup Finals before falling in five games to Los Angeles.  Despite the fact that it the assignment did not include any playing time with the Rangers, Ryan feels that simply being immersed in the playoff atmosphere helped him and his fellow Black Aces to grow significantly.

“I think the group of guys that we had there, the young core in the organization, with the guys that we played with in Hartford, we’re all so tight and so closely-knit that it was a blast for us,” he said.  “Just to be able to soak in the experience of being here (at the Training Center) and being able to go to the games and watch playoff hockey, that’s a pretty great experience. Obviously you’d like to be out on the ice, but that’s part of the process.  And you’ve got to learn from that and see the things that those guys are doing and obviously cheer for them.  And to be here for two months and be able to experience that and skate every day, and obviously keep working on your game and staying ready, it was a great experience for us.”

Chris Bourque’s resume already includes a wealth of postseason experience, as well as a total of 51 NHL games-played, with Washington, Pittsburgh and Boston.  With 433 points in 437 career AHL games-played, three AHL championships and a scoring title, he does not have much left to prove at the AHL level, but is eager to take on the next challenge, wherever that happens to be.

“If that (NHL) opportunity comes, hopefully I take full advantage of it, but at the same time, whatever I can do to help this organization, whether it’s help the younger guys develop in Hartford, or help them make it to the playoffs, the team looks good.  So you can’t ever rule out a good playoff run there (with the Wolf Pack).

“That would be nice for these guys to go through.  Whenever you win a Calder Cup, those guys that won, you see them sprinkled out through the NHL.  So that always helps the organization, when you can make a deep playoff run.  It just gives you the experience and the knowledge that you need to make that next step.  So if that’s what they need me for, then I’m all for it.  It seems like there’s a good group of young guys here, so I’m really excited to play with them.”

In addition to those young prospects that Chris Bourque references, he is not the only experienced veteran who has been added to the fold.  The Rangers organization this summer signed a strong group of older players, with Bourque being joined by the likes of forwards Chris Mueller, Ryan Potulny and Nick Tarnasky, defensemen Mike Kostka, Matt Hunwick and Steven Kampfer, and goaltender Cedrick Desjardins.  With these types of individuals to bolster the organizational roster, Ryan Bourque, who was one of the more experienced players on last year’s Wolf Pack team as a third-year pro, is enthusiastic about the depth from which this season’s Ranger and Wolf Pack clubs will have to draw.

“I think it’s going to be a much deeper group than we’ve had in the past several years,” Ryan said.  “I think there’s a good core in Hartford of young guys that really have developed into great players, and you saw it in the second half of last year with our first two lines, the youth movement that we had, and the success that we had in the second half.  So I think that with that group, if guys make it here (New York), then it’s awesome for them, but whether we have guys up here or down there (Hartford), there’s going to be a lot of depth.  And to bring in the veterans that we did and put them in place, it all depends where guys end up, but regardless we’re going to have a lot of depth in the organization, and we’re going to have an opportunity in Hartford to have a great team.  I think it’s just a matter of coming together and having chemistry.

If both Ryan and Chris Bourque are parts of the group that ends up with the Wolf Pack, they will be the first-ever pair of brothers to play together on the Wolf Pack team.  The club has had two other brother acts in its history, Peter (1997-98) and Chris (2006-07) Ferraro and Chris (2001-02) and Michael (2013-14) St. Croix, but neither of those duos was ever on the Pack roster at the same time.