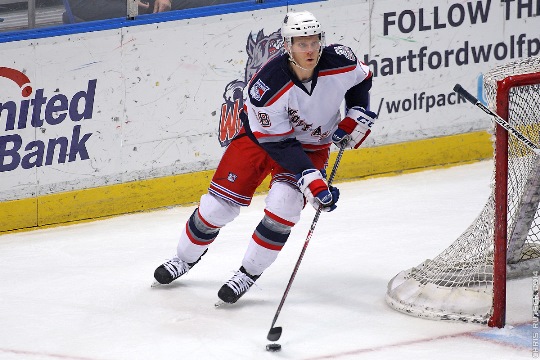 Stamler, a 27-year-old fourth-year pro, began this year with the Gwinnett Gladiators of the ECHL, after splitting last season between the Wolf Pack and its ECHL affiliate, the Greenville Road Warriors.  The 6-1, 203-pound Stamler has skated in five games with the Gladiators this season, notching three assists, two penalty minutes and a team-best +4 rating.

Last season Stamler logged 39 games with the Wolf Pack, his first career AHL action, contributing two goals and six assists for eight points and serving 48 minutes in penalties.  His +6 rating was tied for tops among Hartford defensemen.  In 30 ECHL games with Greenville in 2013-14, the Edmonton, Alta. Native had three assists and 49 PIM.

In 85 career ECHL games with the Las Vegas Wranglers, Road Warriors and Gladiators, Stamler has totaled five goals and eight assists for 13 points, along with 125 PIM.

Jackson comes to the Wolf Pack from Greenville, where he has registered three assists, the most among Road Warrior defensemen and second overall on the team, and six penalty minutes in seven games.

A fifth-year man out of the Western Hockey League, Jackson, 6-2 and 205 pounds, spent all of last season in the AHL, splitting time between the Bridgeport Sound Tigers and Springfield Falcons. In 53 games with the Sound Tigers, the 25-year-old native of Edson, Alta. had three goals and 21 assists for 24 points, plus 36 PIM.  In four outings with the Falcons, he chipped in one assist and served two PIM.

The Wolf Pack are in home-ice action today, as the Worcester Sharks pay a visit to the XL Center for a 3:00 game.  The Wolf Pack’s “Click It or Ticket Family Value Pack” is again featured on Sundays this year, and has been expanded to Wednesday and Thursday home games as well.  The Family Value Pack features two tickets, two sodas and two hot dogs, all for only $35.