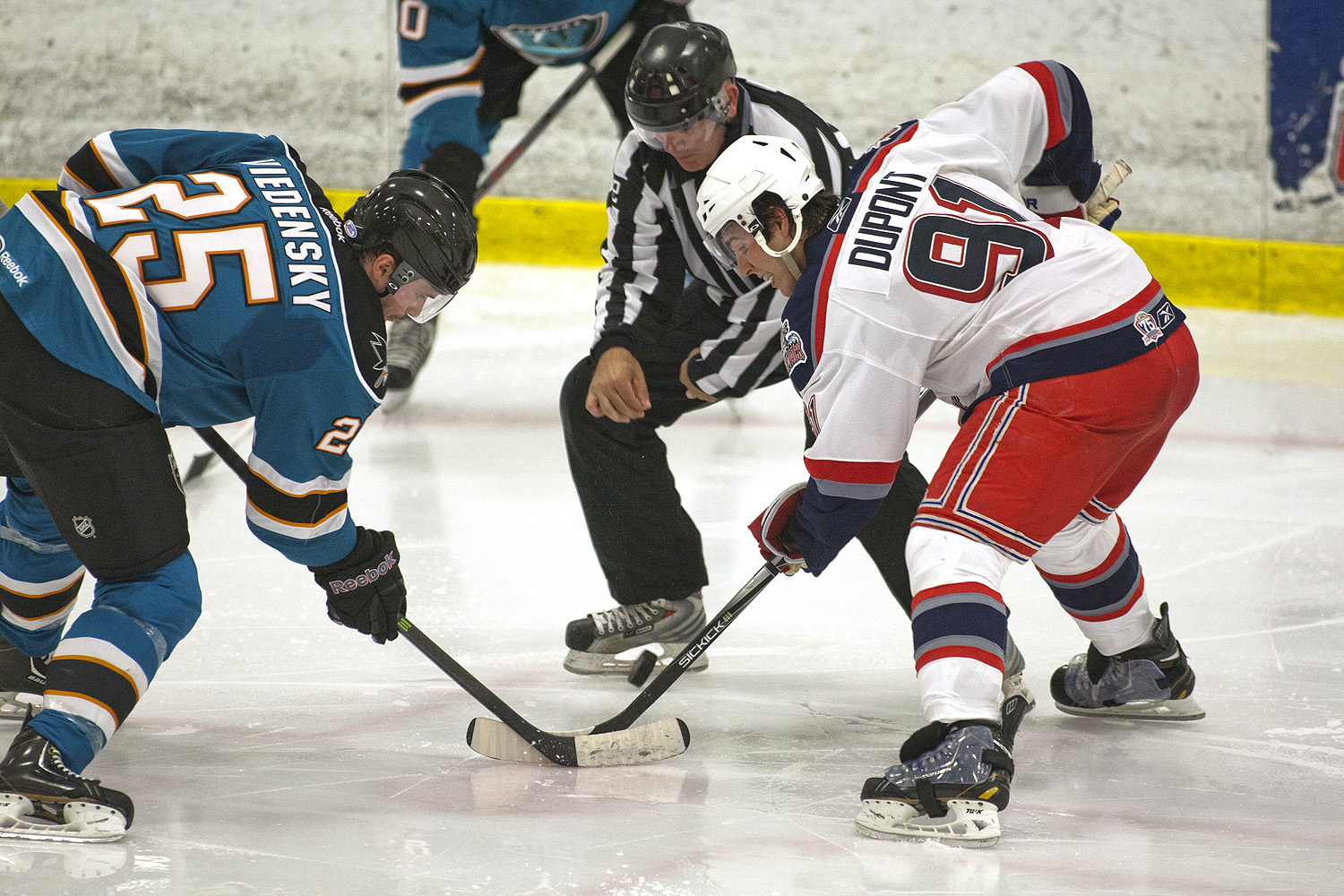 Brandon Hynes scored two goals, and fellow rookie Michael St. Croix had a goal and an assist, to lead the Wolf Pack to a 5-2 win over the Worcester Sharks Wednesday night at Champions Skating Center in Cromwell, CT, in the Pack’s AHL preseason opener.

The Wolf Pack were outshot 13-7 in the first period, but came out of the frame with a 2-1 lead.

The Sharks opened the scoring on the game’s first power play at 10:12 of the first, with Hartford’s Jason Wilson in the penalty box for cross-checking. Kidd beat Malcolm with a snap shot from the right point.

That lead was short-lived, however, as the Wolf Pack turned the tables with a pair of goals in a span of 56 seconds, starting only 47 seconds after Kidd’s goal.

On the Wolf Pack’s first power play, created by a delay-of-game penalty against Marc Zanette, Dupont banged the puck in from the left side of the slot on a rebound to tie the score at 10:59. Gjurich then put the puck past Shark netminder Tyler Beskorowany (28 saves) from in close at 11:55, giving the Pack a 2-1 advantage.

The only scoring of the second period came at the 4:06 mark, when Hynes gave the Wolf Pack a 3-1 lead. Hynes used Josh Nicholls as a decoy on a two-on-one and fired a shot past Beskorowany from the right-wing side.

Hynes struck again early in the third period to make it 4-1 Wolf Pack, beating Beskorowany with a sharp-angle shot from the goaltender’s right. Viedensky got that goal back only 49 seconds later, though, with a delayed-penalty goal at 1:57. Viedensky had the puck go off of his stick as he moved across the slot, but the loose puck slid between Malcolm’s legs and into the net.

Malcolm held the Sharks at bay the rest of the way, and St. Croix created the final margin with an empty-net goal at 19:21.

The Wolf Pack are right back in preseason action Thursday night, as they take the ice at the XL Center against the Albany Devils at 7:00 PM. Admission to that game is free for Wolf Pack 2013-14 season seat-holders, whose season tickets will be available for pickup at the game. Tickets for the general public are priced at $5 for Thursday’s game, and one dollar from each ticket sold will be donated to the Ryan Gordon/Hartford Wolf Pack Community Scholars Fund. That fund is in memory of young fan Ryan Gordon, who passed away in 2006 and asked that a portion of the monies set aside for his college education be donated to the Hartford Wolf Pack Community Foundation.

Tickets for Thursday’s game are available at the Public Power Ticket Office at the XL Center and on-line at www.hartfordwolfpack.com.