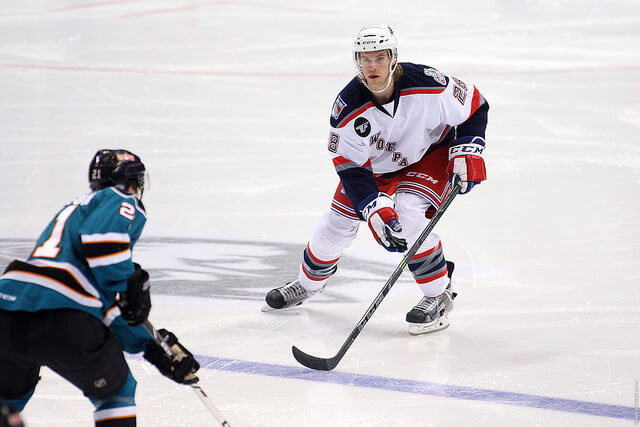 A five-goal second period made the difference for the Worcester Sharks Friday night at the DCU Center in Worcester, in a 5-2 victory over the Wolf Pack.

The Wolf Pack got first-period goals from Oscar Lindberg and Marek Hrivik, but Worcester exploded against Hartford goaltender Jeff Malcolm in the second frame.

“We had some bad breaks go against us, and they had some chances, some sustained offensive pressure, and we didn’t weather the storm very well,” Wolf Pack head coach Ken Gernander said of the decisive second frame.

The loss dropped the Wolf Pack to 30-19-5-3 (68 points) and into a tie with the Sharks and the Providence Bruins for sixth place in the AHL’s Eastern Conference.

The Wolf Pack had a strong first period, outshooting their hosts 14-8 and controlling much of the play.

Lindberg scored his 17th on the year on a power play at 8:33 to open the scoring, set up by fellow Swedish import Carl Klingberg, who was playing in his first game with the Wolf Pack after being acquired by the parent New York Rangers in a trade with Winnipeg Sunday.  Klingberg fed the puck from along the goal line on the right-wing side to Lindberg in the slot, and Lindberg flicked it past Shark goaltender Troy Grosenick (33 saves).

Hrivik doubled the Hartford lead with 3:25 left in the period, after parking himself in front of Grosenick.  Mat Bodie lifted the puck toward the net from the right-wing boards and it hit Hrivik, who was facing center ice.  Hrivik then turned and was able to get jam the puck behind Grosenick on a second effort.

The tables completely turned in the second, as the Sharks outshot the Wolf Pack by a 22-11 margin on their way to the five-goal outburst.

The Sharks tied the score quickly, with goals only 1:13 apart by Haley and Fedun inside the first 2:47 of the period.

Haley made it 2-1 at the 1:34 mark, jamming the rebound of a shot by Coetzee from the right circle past Malcolm.

Fedun then deadlocked the game at 2:47 on a power play, as his drive from the left point hit a Wolf Pack defender and flew past Malcolm.

The tie held up until the Sharks started a late flurry at 13:04.  Just after Worcester finished killing a penalty, Young deflected a shot past his ex-Yale University teammate Malcolm, tipping Dylan DeMelo’s left-point drive.

Worcester then struck for two goals in six seconds starting at 16:47, when the Sharks capitalized for their second power-play goal of the game.  Lerg passed across the slot from the right-wing boards, and Tarasov knifed the puck past Malcolm.

Then, at 16:53, Haley scored his second of the game, burying a pass from behind the net by Coetzee.  Two goals-against in six seconds tied a Wolf Pack franchise record.

Malcolm, who made 25 saves, was replaced to start the third period by Yann Danis, who turned away eight Worcester shots in a scoreless third session.

The Wolf Pack are in home ice action at the XL Center on Saturday, with the Hershey Bears visiting for a 3:30 game.  The first 2,000 fans into that game will receive a bobblehead of Wolf Pack forwards Chris and Ryan Bourque, presented by Team Ferior.