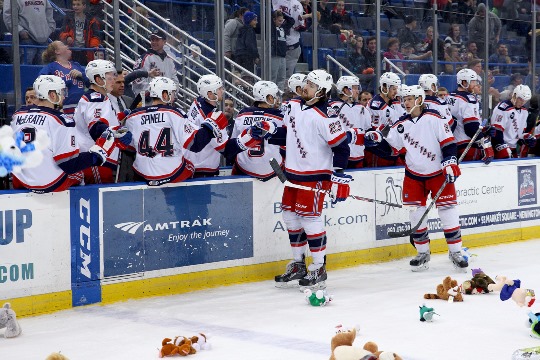 Third-period goals by Ryan Haggerty and Ryan Bourque broke a 3-3 tie and carried the Wolf Pack to a 5-3 win over the Worcester Sharks Friday night at the XL Center.

The victory was the third in a row for the Wolf Pack, who also got a goal and an assist each from Chris Bourque and Michael Kostka.  Jeff Malcolm made 35 saves to get the win, in his first AHL appearance of the season.  Daniil Tarasov, Adam Burish and Micheal Haley scored for Worcester.

Hartford struck first with 58.6 seconds remaining in the first period. Conor Allen was the man who made the teddy bears fly, on “Teddy Bear Toss” night, when he scored his fourth goal of the season.  Allen got a pass from Kostka as he started to break in to the zone, and Allen fired a wrist shot from just inside the left faceoff dot to beat Troy Grosenick (23 saves) on the blocker side.

“They made a nice D-to-D pass at the blue line and some strong offensive play there,” said Hartford coach Ken Gernander.  “It was good that we could generate offense 5-on-5 tonight because I think that was more the style of play we played tonight.  We didn’t have that offensive zone time and that offensive zone pressure.  It didn’t enable us to do anything in terms of drawing penalties and using our power play tonight.”

The Sharks tied the game at one, at 9:43 of the second, when Dylan DeMelo fired a slap shot from the blue line that deflected off of the hip of Tarasov, who was standing at the side of the net.

That started a run of five goals in 4:22, and just 17 seconds later, a turnover by the Pack led to Burish getting the puck at the top of the left faceoff circle with an open lane to the net.  Burish walked in and beat Malcolm on a straight wrist shot.

“Obviously mistakes are going to happen in the course of a game so you just have to limit them,” said the Wolf Pack’s Chris Bourque.

The Pack answered back quickly, at 10:19, when Bourque hit Kostka with a pass across the faceoff circles that left Grosenick (23 saves) on the other side of the net.  Kostka’s wrist shot tied the game at two and gave him his second goal of the season.

“Obviously those three goals went in pretty quick there,” said Haggerty.  “You just tap your linemates and say let’s settle it down. Let’s control the puck and not give up too many chances, and play in their end to try and generate something to get the momentum back in our favor.”

Chris Bourque gave the Pack a 3-2 lead for a short period of time when he scored his 12th goal of the season at 13:35.  Marek Hrivik did the dirty work behind the net and was able to find Bourque sitting in front by himself.

The Sharks did answer back quickly, when Haley was able to put away the rebound of an Evan Trupp shot.  The goal tied the game at three just 30 seconds after the Pack took the lead, and ended the scoring for the high-powered second period.

The Pack regained the lead for good 37 seconds into the third period, when Haggerty was able to beat Grosenick on a wrist shot from just inside the right faceoff circle.

“Anytime you get a little time and space to shoot the puck in stride, I think you have a little more of an advantage than the goalie does,” said Haggerty.

Oscar Lindberg was able to add to the Pack lead at 5:07, when he scored his ninth goal of the season,  Joey Crabb was able to find Lindberg with a pass from the right corner, and Lindberg scored through Grosenick’s five-hole to give the Pack a 5-3 lead.

“Obviously you feel better out there.  There’s not that much pressure when you have a 5-3 lead,” said Hrivik.  “That doesn’t mean necessarily that you have to stop playing hard though.”

The Wolf Pack’s next game is this Sunday, December 14 in Bridgeport, a 3:00 PM battle with the Sound Tigers at Webster Bank Arena.  All of the action of that battle can be heard live on Fox Sports Radio 1410, and on-line at www.foxsportsradio1410.com and iHeartRadio.  Video streaming is available at www.ahllive.com.

The next home action for the Wolf Pack is Friday, December 19, with the Syracuse Crunch visiting the XL Center for a 7:00 game.  All Friday-night Wolf Pack home games feature $1 hot dogs and $2 beers through the start of the second period.