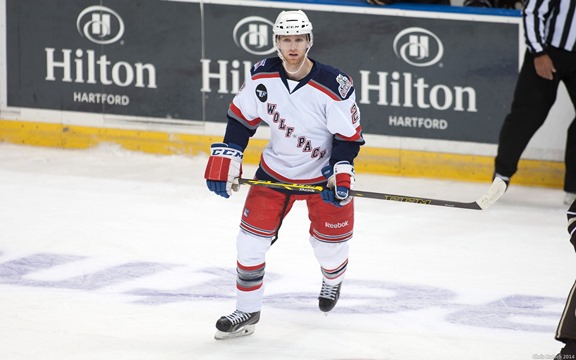 The Wolf Pack let a 4-2 lead slip away in the third, but with the game seemingly headed for overtime, Tommy Hughes and Danny Kristo combined to get the puck to Bodie, who moved to the left-wing faceoff dot and launched a shot that went high into the net behind Worcester goaltender Troy Grosenick, a former teammate, and roommate, of Bodie’s at Union College.

“That was a great play by Kristo and Tommy Hughes there, to get me the puck with a lot of open space,” Bodie said of his winning goal, “and then Haggerty and Lindberg in front of the net, they were creating a lot of traffic and I don’t think the goalie got a great look at it, but I just tried to place it up in the top half of the net.

“We got up to that 4-2 lead in the third and they were able to battle back, and we just stuck with our game plan and were able to find the game-winner.”

After Bourque scored a power-play goal 1:52 into the third period, banging the puck off of Grosenick and just inside the goal post from close range, Haley and Taylor Fedun scored only 1:55 apart shortly thereafter, to tie the game quickly.

Haley was left alone in front of the Wolf Pack net at 2:30, just 38 seconds after Bourque’s goal, and wired a shot past Jason Missiaen, who had replaced an injured Cedrick Desjardins in the second period.  Then, on his next shift, Haley and his linemates, Karlsson and Ryan Carpenter, combined to forecheck the puck free to Fedun, who got to his forehand in the slot and found the net at 4:25, with several Wolf Pack players scrambling around in front to try to clear the puck.

After that flurry, the tie held up until Bodie scored his late game-winner.

The game started poorly for the Wolf Pack as Petter Emanuelsson gave Worcester a 1-0 lead on the game’s first shot on goal, only 2:05 in.

The Pack’s Sam Noreau attempted to move the puck up the right-wing boards in his own end, but it deflected right on to the stick of Emanuelsson, who was headed up the slot.  Emanuelsson fired a low shot that beat a surprised Desjardins.

The Wolf Pack steadied their game after that, though, and would get the next two goals.

Allen scored his first goal of the year to tie the game at 11:30, off of a pass from Kristo.  Kristo blocked a dump-in attempt by Sharks defenseman Konrad Abeltshauser, and carried down right wing into the Worcester zone.  Kristo spun back and feathered the puck into the slot to Allen, who snapped it past the catching glove of Grosenick (22 saves).

Hartford then jumped ahead with 45 seconds remaining in the first, on Lindberg’s team-leading third goal of the season.  Justin Vaive battled the puck away from Matt Taormina below the Worcester goal line to Haggerty, who passed to Lindberg in the slot.  Lindberg’s one-timer beat Grosenick for a 2-1 Wolf Pack lead.

The Wolf Pack got into penalty trouble in the first half of the second period, and the Sharks capitalized to tie the game at 7:54.

Hartford killed 40 seconds of two-man disadvantage, but with Worcester skating five-on-four, Karlsson worked a give-and-go with defenseman Matt Tennyson, with Karlsson firing a shot past Desjardins from the left side of the slot.

That chased Desjardins (17 saves) from the game, after he had apparently been shaken up making a save moments before, and Missiaen was forced into action in relief.  Missiaen went on to stop 15 of the 17 shots he faced, to earn his first win of the season.

The Wolf Pack changed the momentum again less than four minutes later, at 11:39, on the first goal of the year for Kristo, who led the Wolf Pack in goals last season with 25.  Kristo bumped the puck away from a Worcester defender to Nick Tarnasky on left wing, and Tarnasky fed back across the slot to Kristo for an easy finish.

The victory in Worcester improved the Wolf Pack’s season record to 3-0-1-0 for six points, and the club is now 2-0 on the road.

The Wolf Pack are next in action this Friday night, October 24, hosting the Albany Devils at the XL Center in a 7:00 PM game.  Once again this season every Friday night home game features $1 hot dogs and $2 beers through the start of the second period.  Tickets for all 2014-15 Wolf Pack home games are now on sale at the XL Center ticket office, on-line at www.hartfordwolfpack.com and by phone at (877) 522-8499.  Wolf Pack tickets start as low as $12 for youth 12 years old or younger.