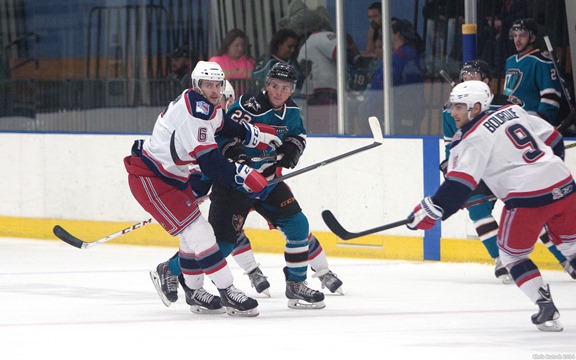 Matt Tennyson had two goals and an assist, and Evan Trupp scored twice, to lead the Worcester Sharks to a 6-2 win over the Wolf Pack Saturday night at Trinity College’s Koeppel Community Sports Center, in the Wolf Pack’s last of three home preseason games.

The game was scoreless until 16.6 seconds remained in the first period, when Chris Bourque scored a power-play goal, with the Sharks’ Gus Young in the penalty box for interference.

Bodie fed a cross-ice pass from the left circle to Bourque at the right faceoff dot, and Worcester goaltender Troy Grosenick (20 saves) had no chance on Bourque’s one-timer.

The Sharks would dominate the second period, though, outshooting the Wolf Pack 17-2 and scoring three times.

Trupp evened the score at one at 5:24, clicking off of a faceoff.  The draw was to the right of Hartford goaltender Jason Missiaen (33 saves), and Trupp found the puck right after the drop and slipped it between Missiaen’s pads.

Worcester then scored twice on a three-minute major power play, created by a five-minute interference penalty against Shawn O’Donnell, who spilled Bryan Lerg as Lerg headed toward the Shark bench door.  O’Donnell then was challenged to a fight by Worcester defenseman Konrad Abeltshauser, which earned Abeltshauser an instigating penalty and a misconduct.

Tarasov put Worcester ahead 17 seconds after the power play began, scoring from the left side of the slot after Tennyson set him up from the center point.

Then, just 42 seconds later, at 9:13, Tennyson scored from virtually the same spot that he fed Tarasov, as Tennyson’s snap shot from the middle of the blue line hit Missiaen and trickled into the net.

The Sharks stretched their lead to 4-1 at 5:33 of the third, on Trupp’s second of the game.  Dylan DeMelo snapped the puck from high in the slot, and Trupp re-directed it past Missiaen.

The Worcester power play cashed in for its third score of the game at 11:03, with Tennyson scoring his second of the night.  Seconds after a two-man advantage expired, Tennyson skated to the top of the circles and fired a shot up under the crossbar.

The Wolf Pack man-advantage unit answered that goal at 14:47, with Trupp off for hooking.  Bodie set up Ryan Bourque at the right faceoff dot, and Bourque’s one-timer cleanly beat Grosenick, cutting the lead to 5-2.

The Pack lost track of Jeremy Langlois, though, at 16:37, and Langlois broke in alone and banged the puck off the post and in, to increase it to a 6-2 margin.

The Wolf Pack wrap up their preseason schedule Sunday, October 5, traveling to Springfield to take on the Falcons in a 3:00 PM game.  The Pack open the home portion of their 2014-15 AHL regular season Saturday, October 18 at the XL Center, hosting the Portland Pirates at 7:00 PM.  Tickets for that game, and all 2014-15 Wolf Pack home games, are now on sale at the XL Center ticket office, on-line at www.hartfordwolfpack.com and by phone at (877) 522-8499.  Wolf Pack tickets start as low as $12 for youth 12 years old or younger.