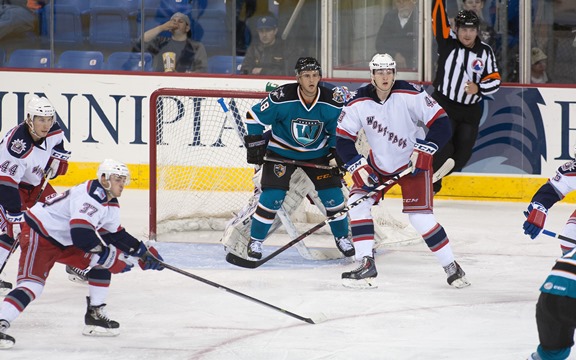 It took most of the first period for any offense to be generated, but three goals went up on the board in the last 4:40 of the session.

Sean Escobedo gave the Wolf Pack the game’s first lead at the 15:20 mark, beating Worcester starting netminder J.P. Anderson (three goals against on ten shots) under his left arm, after Petter Emanuelsson had blocked an Escobedo shot right back to him.

The Wolf Pack upped the lead to 2-0 on a power-play 1:31 later, at 16:51, with Vladyslav Gavrik in the penalty box for interference.  Kristo stickhandled to the top of the circles and fed a pass to Potulny, who one-timed a shot from near the right-wing boards, below the hash mark, past Anderson on the short side.

The Sharks, though, got on the scoreboard at 18:39, with Langlois scoring his first of the game.  Langlois forced Mike Catenacci into a turnover in the slot in the Wolf Pack end, and then worked a give-and-go with Jimmy Bonneau before putting a shot past Hartford goaltender Mackenzie Skapski’s glove side.

The Wolf Pack got that one back 3:47 into the second, scoring directly off of a faceoff.  Potulny won a draw from Langlois in the right circle and drew the puck back to Kristo, whose quick shot eluded a surprised Anderson.

Then, after Worcester changed goaltenders at the 12:59 mark, Chris McCarthy upped the Wolf Pack’s lead to 4-1 with a shorthanded breakaway goal at 18:36.

With Chad Nehring off for slashing, McCarthy worked the puck loose near the center line and sped in alone on relief goalie Aaron Dell.  McCarthy made a move to his forehand and put the puck between Dell’s legs for a three-goal advantage.

The Sharks dominated the third from the outset, however, and quickly turned the game around.

Abeltshauser cut the Hartford lead to 4-2 at 3:53, with a shot from the left circle.  Abeltshauser’s drive beat Skapski (31 saves) high to the stick side, after Kyle Bigos had fed the puck across the slot.

The Sharks then moved to within one just 1:46 later, at 5:39, on a power-play goal by Melker Karlsson.  Conor Allen partially fanned on a clearing attempt, allowing former Wolf Pack Micheal Haley to put a feed from the high slot on to the stick of Karlsson, alone in front of Skapski.  Karlsson faked Skapski to the ice before putting a backhander into the net.

Langlois then tied the score at four with his second of the game at 11:26, capping strong pressuring shift by the Sharks.  Abeltshauser’s pass found Langlois in the left circle, and his shot went off of Skapski and found its way into the net.

The 4-4 tie held up throughout the rest of regulation, and the new AHL overtime format, which features three minutes of four-on-four play followed by four minutes of three-on-three, failed to produce a goal.

In the best-of-three shootout, Worcester’s Bryan Lerg was the only shooter to score, coming in slowly on Skapski and connecting on a backhand move on the Sharks’ second attempt.  Dell (one goal-against on 13 shots) stopped Potulny and Kristo, and then McCarthy had the puck get away from him on the Wolf Pack’s third chance, giving Worcester the 5-4 win and running the Wolf Pack’s preseason record to 1-0-0-1.

The Wolf Pack’s last of three home preseason games is this Saturday night, October 4, at the Koeppel Community Center at Trinity College.  The Wolf Pack and Sharks rematch at 7:00 PM on Saturday, and donations will be accepted at the door in lieu of an admission charge, benefitting the Ryan Gordon/Hartford Wolf Pack Community Scholars Fund.  The fund memorializes young fan Ryan Gordon, who passed away in 2006 and asked that a portion of the monies set aside for his college education be donated to the Hartford Wolf Pack Community Foundation.  Suggested donation is $5 per person.  The Koeppel Community Sports Center is located at 175 New Britain Ave. in Hartford.