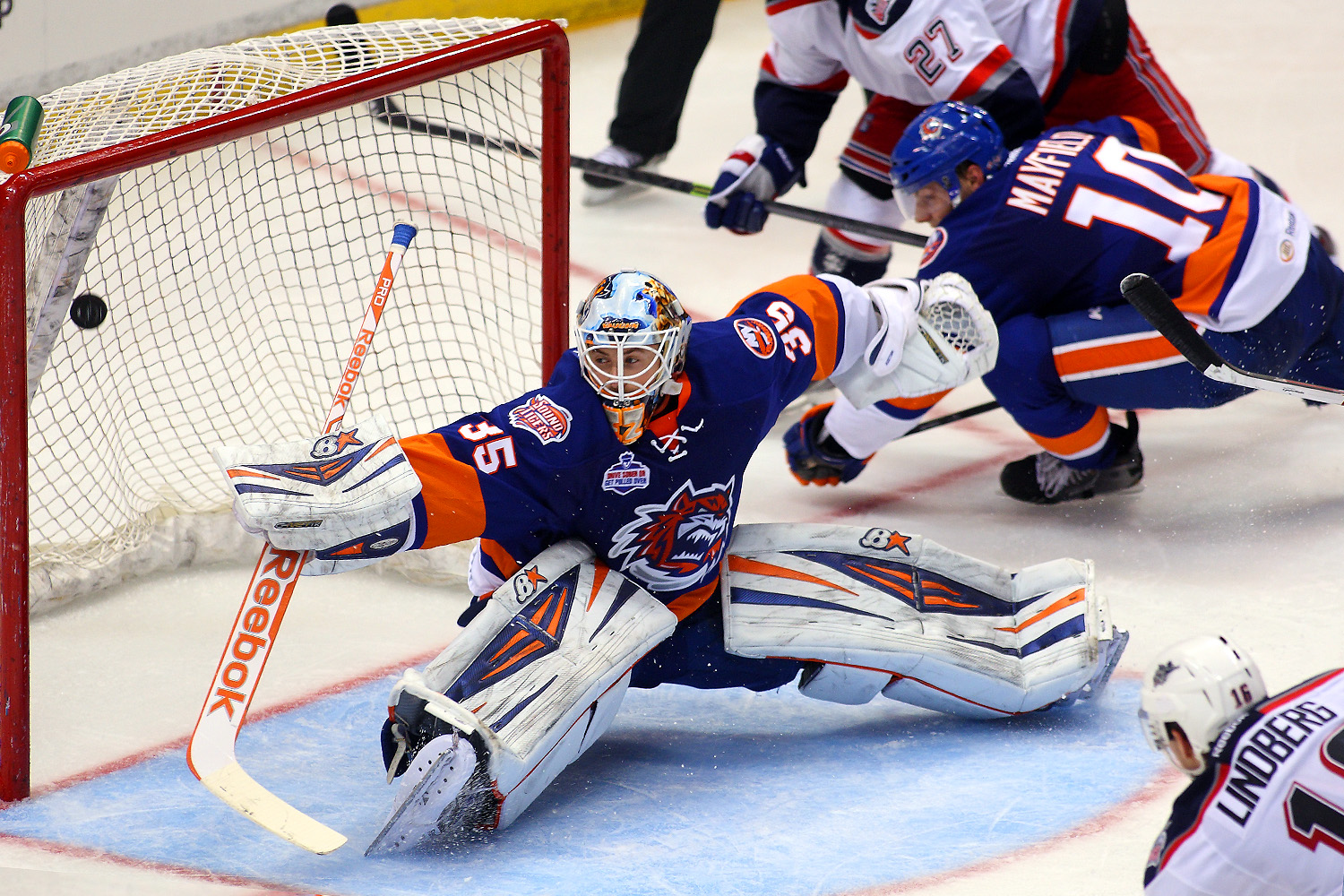 Third-period goals by Danny Kristo and Oscar Lindberg broke a 3-3 tie Wednesday night at the XL Center, and propelled the Wolf Pack to a 5-3 win over the Bridgeport Sound Tigers.

Kristo said of the Wolf Pack’s third-period dominance in the early season, “I don’t know what it is, everyone just pulls it together in the third to get a win.  Everyone just buys into their role, and it shows in the third period.”

Bridgeport’s power play, which came into the game last in the AHL at 3/43, created the only goal of the first period, at 13:15.  With Dylan McIlrath in the penalty box for cross-checking, the Sound Tigers’ Aaron Ness got a break, when a pass went off of Danny Syvret’s skate right on to Ness’ stick blade.  Ness’ shot from the top of the circles went through a crowd and got past Missiaen.

After that low-scoring first, the two teams combined for five goals in the second, the Wolf Pack getting the first three and then Bridgeport coming back with two.

Haley, an ex-Sound Tiger, tied it at one at 1:28, off a nice three-way passing play.  Kristo sent Kyle Jean and Haley into the Bridgeport zone on a two-on-one, and Jean found Haley on right-wing for an easy finish.

The Wolf Pack then converted on their first power play of the game at 4:20, with Allen scoring.  Kristo again had the nifty assist, passing across to Allen at the left-wing faceoff dot, and Sound Tiger goaltender Kenny Reiter had no chance on Allen’s high shot.

The Hartford penalty kill got a very fortunate bounce for a shorthanded goal, and a 3-1 Wolf Pack lead, at 9:50.  Aaron Johnson shot the puck down the ice from his own end, and, as it went around the boards, it kicked out from behind net and into the slot.  Reiter was caught in behind the net, and Hrivik had the whole goal to deposit the puck into.

That lead evaporated in the span of only 20 seconds just about five minutes later, though, as Scott Mayfield and Halmo scored two quick goals to tie the game.

Mayfield put a shot from the right point in off the post behind Missiaen at 14:37, and Halmo buried a rebound at 14:57.

That tie lasted until the 8:04 mark of the third period, when Fast, in his first game of the year with the Wolf Pack after playing eight NHL games with the parent New York Rangers, found his fellow Swedish import Lindberg at the left side of the slot, and Lindberg banged it in for what turned out to be the winner.

Kristo then got an insurance goal with 4:56 left, upping his team-leading total to seven on the year.  Kristo got a pass from Nash and fired a snap shot from the right-wing circle for the final margin of 5-3.

The Wolf Pack’s next action is this Friday night, November 1, the first of back-to-back road games in Springfield.  Faceoff is 7:00 PM, and all the action can be heard live on Fox Sports Radio 1410, on-line at www.foxsportsradio1410.com and iHeartRadio.  Video streaming is available at www.ahllive.com.

The Pack’s next home game at the XL Center is Friday, November 8, a 7:00 battle with the Providence Bruins.  Once again this season, each and every Wolf Pack Friday-night home game features $1 hot dogs and $2 beers, through the start of the second period.