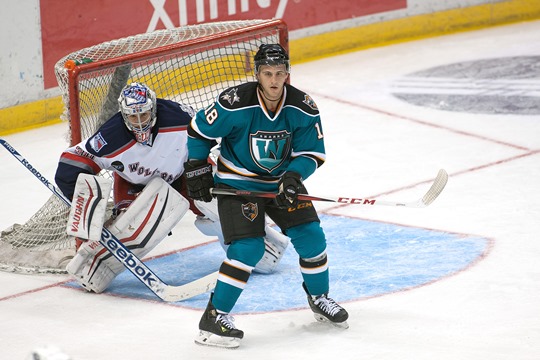 The Wolf Pack escaped with a 4-3 victory Sunday afternoon over the Worcester Sharks at the XL Center.

Hartford drew first blood when the Bourque brothers capitalized on a power play opportunity with 8:42 gone in the first period.  Ryan Bourque carried down to the right faceoff circle and looked across the crease to find Chris Bourque, who beat Worcester goaltender J.P. Anderson to the glove side.

J.T. Miller got in on the action just 2:38 later, when he finished another pass across the front of the crease, this one from defenseman Mat Bodie.

The scoring was not done for the Wolf Pack in the first period.  Just as a Hartford power play was expiring, Danny Kristo let fly from the same faceoff dot that Chris Bourque capitalized fro, and fired a wrist shot that again beat Anderson glove side.

“Our starts are something that we’ve really tried to key on,” said Miller.  “We have to make sure that we don’t get too comfortable.  We got outshot handily, even though I thought we were playing well.”

While Hartford was outshot 39-18 at the end of the game, the teams were at a stalemate in the second period.

“I thought we made some real good plays early (offensively) and then we tried to force things as the game went on,” said Hartford coach Ken Gernander.

A lot of the credit for the stalemate was due to the play of Hartford goaltender Cedrick Desjardins, and his ability to come up with the big save.

“He was a big part of contributing part of our win tonight,” said Gernander.  “We didn’t do enough to generate offense or to alleviate time spent in our defensive zone for the last two periods of the game.  So now you’re relying on your defense, your penalty killing and your goaltending.”

Desjardins made a few huge saves for his teammates, especially on the penalty kill where he faced several point-blank chances from the slot and slammed the door shut.

In the third period, the Pack came out firing, with Jesper Fast putting up his first goal of the season just 28 seconds in to play to make it 4-0.

\Worcester foiled Desjardins’ shutout bid with 8:08 remaining in the third period, when Ryan Carpenter found the puck in front of the net and put it home for his second goal of the season.

The third period push continued for the Sharks when Freddie Hamilton cut the Hartford lead to just two with 3:13 left in the game.

Tyler Kennedy really took the Pack down to the wire when his second goal of the season made it a one goal game with just 1:12 left in regulation.

“If we face adversity, we see the guys who want to fight through the true adversity and that’s what we did,” said Desjardins.  “We have a lot of gamers in that locker room and a lot of guys with experience, so we never panic.”

Next up for the Wolf Pack is a “school day special” morning game this Wednesday, November 5 against the Albany Devils.  The Pack and Devils face off at 11:00 AM at the XL Center on Wednesday, and that’s another chance to take advantage of the Wolf Pack’s “Click It or Ticket Family Value Pack”.  The Family Value Pack features two tickets, two sodas and two hot dogs, all for only $35.