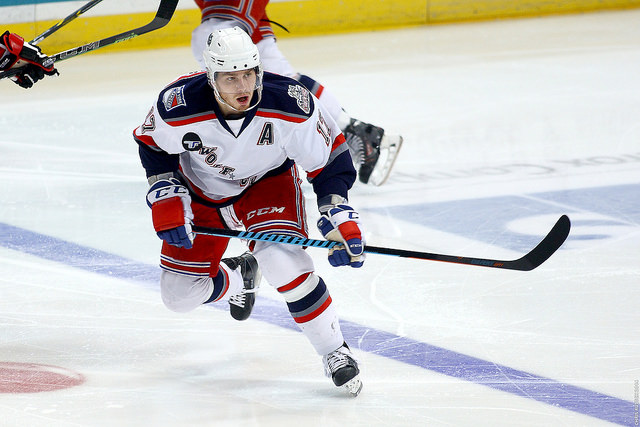 A second-period power-play goal by Brendan Shinnimin stood up as the game-winner Wednesday night at the Cross Insurance Arena in Portland, ME, in a 3-1 victory by the Portland Pirates over the Wolf Pack.

Chris Bourque scored the only Wolf Pack goal, increasing his team-leading total to 13, and Mackenzie Skapski made 27 saves, but Eric Selleck also scored for Portland, Lucas Lessio added an empty-net goal, and Andrew Campbell assisted on all three Pirate scores.

“Through the first two periods we only had 13 shots,” Bourque said.  “We had a lot of (offensive) zone time, but not too many shots at the net.  You’re not going to score too many goals when you don’t have many shot attempts.  In the third I thought we did a better job of getting the puck towards the net, and we’ve just got to keep on working on doing the ‘dirty’ things, little things that add up to goals.”

After a scoreless first period, Portland would build a 2-1 lead in a second period in which they outshot the Wolf Pack 13-8.

Selleck gave the Pirates the game’s first lead at 7:34, converting on a two-on-one with Campbell.  Corey Trivino started the play, and Skapski got a piece of Selleck’s shot from the left circle, but could not keep it out of the net.

The Wolf Pack answered back only 1:44 later, at 9:18, as Bourque broke over the blue line and headed up the slot, beating McKenna to the stick side with a shot from about 35 feet out.

“I just put the puck toward the net,” Bourque said of the goal, which ended a five-game drought without a point for the Wolf Pack’s leading scorer (13-14-27).  “It was good location, and luckily it went in.”

The Portland power play capitalized at 11:57 to put the Pirates on top to stay, with Tommy Hughes in the penalty box for slashing.  Shinnimin capped furious Portland pressure by rapping a shot through Skapski from the right circle, for the eventual game-winner.

The third frame was a standoff, with shots even at ten apiece, and the Wolf Pack’s comeback effort was hampered by a hooking penalty called against Mat Bodie with 1:43 left.  Hartford pulled Skapski while shorthanded and had some decent pressure, but Lessio was credited with an open-net goal at 19:55, when Conor Allen broke Lessio’s stick with a slash, after Lessio had stepped past the Wolf Pack defenseman.

The next action for the Wolf Pack is back home at the XL Center this Friday, January 2, with the St. John’s IceCaps visiting for a 7:00 game.  All Friday-night Wolf Pack home games feature $1 hot dogs and $2 beers through the start of the second period.